this is a photoshopping of a sketch/design from my friend.

it`s a stylised little dj-mixer avatar character. much like how deadmaus and various other dj`s have pseudo personalities.

and this is an animated gif for the tumblr phenomenon a while back, dumb running sonic.

because sonic art is obligatory on this blog. it`s like the law or something.

speaking of sonic related things, i did this a while back for crush 40`s facebook page, think they had a birthday/anniversary or something.

there’s a plethora of easter eggs in it, like the urban dictionary definition of crush 40 in the background, and Johnny’s hardline bands logo as his t-shirt graphic. and the `crush` soda logo for Jun’s shirt. and some familiar silhouettes in the audience.

I needed a new business card since my university email expired, so here it is!

it seems alright here, but really didn`t like it once it had been printed. there was a lot of cropping and shades came out a lot darker. i`ll need a remake sometime in the future.

right, the next bundle of images is a set of freebies im doing for a student from abertay called Grant Richmond, he`s creating some of project, I`m assuming a first person web browser game which a pixel art style. it should be at this link sometime.

he wanted a set of widescreen scenes viewed in first person. and at a low resolution. i`ve done a bunch of regular res sketches and the actual finished pics.

this is the rough/concept sketch of a character for the project. he wanted a front and back image, in the same resolution as the scenes so im assuming he behaves like a npc who speaks to the player in first person.

and here’s the pixelised final version. made the poses a lot more dynamic. and interesting I hope. 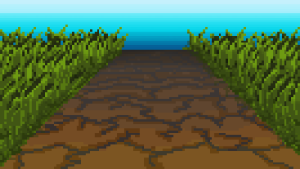 and the final simpler one.

first concept of a splitting path. 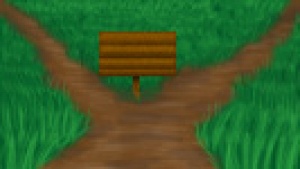 the sword > displayed in the user interface/overlay im assuming. 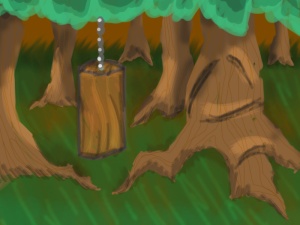