since last time, I`ve been busy working on the animations for patriot. i have everything done for Willie, that`s his name now, don’t worry I`m not being racist. I`M scottish, I can get away with it 😉 also drawn the bagpipes and haggis. all I have left is the tartan spider and red lion and whatever UI stuff and special effects i can think of.

here are all of willies moves in both styles. (these GIFS probably wont animate unless you open them, and they may move at half speed depending. I love you wordpress!)

his final `prone` animation, I only have about 2 anims with blinks in them. and surprisingly it actually reads well in sprite form. must be his chunky design.

this is him charging up his attack. i may cut this to about 3 frames and use it as part of his overall attacking animation to serve as a quick in-between motion. or maybe, this could be him charging up an attack which shoots out three coloured projectiles (like how having full health in zelda shoots a beam)

and here’s the actual strike. someone unfortunately pointed out to me that the three colours on his sword is the Jamaican flag and now I cant unsee it.

this is him charging up a jump, depending on final game mechanics, I could condense this to a quick few frames before performing a jump to serve as a in-between, or have a mechanic where you can hold the jump button, and this animation will play untill you let go. so you can jump higher perhaps.

this is him falling from a jump, or walking off a ledge. his kilt helps give him some air time, like tixels hover jump.

no point in having the platforming needlessly hard since patriot is mainly a hack&slash/adventure game.

this is him sliding down a steep hill. I had this mechanic in place to keep the player going forward, and for tricky moments where they have to time jumps right before a slope to land on higher ground.

the hurt animation. and now that I have them both side by side i realise the side is`nt flashing red on the retro one. oh dear, no big deal. it`s a 5 frame animation.

these ones were fun. this is the animation for switching visual styles. it`s a bit long so I may shorten it later. once these animation reach the end, the character will glow all white and sync into the `out of transform` animations in the alternative style.

this is the `out of transform` anims. the pose is very braveheart-ish/highlander-ish.

the running animations. not very happy with how these came out. running animations are by far the hardest thing to do. and somehow the easiest on a conceptual level. but it took me an entire days work and three retries to get these, so no more polishing.

this is him jumping/soaring into the air.

this is willie`s jump attack. executed by attacking while in the air, funny that.

this is his `warp pipe` animation, for going down the well at the end. you can really see how square his nose is here, did it on purpose. because of the sprite factor, squares are a good fit.

in my original concept, going into the well in HD mode would cause him to fall the distance and break his legs,whereas being in retro mode makes him behave like mario.

I of course forgot this while making both versions of this anim, so the HD warp might not make it into the game/sequence.

this is him skidding, from moving left to right sharply or vice versa. only have the one version on hand right now.

and that`s all for willie! im happy with his design and i hope his animations have some personality to them. now to show off the glorious flying haggis.

the haggis divebombing to attack willie.

the haggi preparing to attack. (only the retro gif available right now.)

the haggis dying and exploding its mincey guts everywhere.

and now for the majestic, graceful roaming bagpipes.

here it is. this was a paint to animate, i did a 22 frame animation of a quad running cycle, and the tweened version i cranked out in a 10th of the time looked better. had middling emotions about that.

this is the death animation, sadly don’t have the retro version to show also.

I need to get hold of some comical bagpipe sounds for this.

these patriot character animations have been the bulk of my work these past few weeks. i plan on dedicating two weeks in the near future for dissertation work as that is ever creeping up on me.

on the exhibition front, I got the mega drive controller working on uni computers but it`s highly finicky, I need to consult staff about having admin right to play around with the settings. im still waiting to hear back about sharing exhibition space. I emailed to ask about sharing with my sound guy, but no word back yet.

also, got my A3 promo poster done. 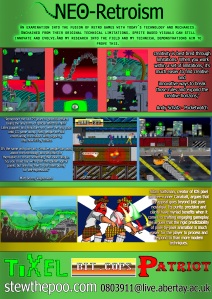 im planning on making three more. semi-instructional posters on how to play all three games, which will also give details about their story/purpose of their development. i`ve done one for tixel and bit.cops, once patiot is more developed i can do one for it aswell. bringing the number of posters in my exhibition to a grand total of four! wow. 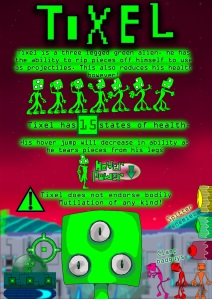 i made a little more progress on the patriot boxart, but I need to make all the enemies first before I can put the last screenshot on the back of the box. soon however!

i also now have the final designs of my business cards. they will come in 3 varieties, postcard size, double-sided and matte hopefully.

another word on patriot, the development side of things has been rough,so it may not have a very thorough playable version at exhibition 😦

regardless, i`ll try and make a video demo like I did with the other concepts. time is ticking however. itll be close if i can get it done on time.

one last thing! screenshots of the cartridges!