been a while since I had some articles pasted in my blog. i`ll be starting on the dissertation verrry soon. so some more literature hunting wouldn’t go amiss.

but first, some of my own stuff, i got the red lions animations done. (as usual, click on the images to see the animations. wordpress runs it at half speed and compressed yadda yadda)

his running animation. surprisingly, a lot easier than a humans.

this is how he dies when he gets hit while he`s running, dissolves into a pile of fur. funny and nonviolent 🙂

him dying while standing.

no attacking animation, he`ll just brainlessly run into Willie like how the bagpipes do.

just the spider animations to do now! doubt i`ll get those done untill next week however. i`m thinking about revising the Tixel and bit.cops poster from last post aswell.

it has a really smart trick for making it`s pixels look prettier. the whole game has a sort of hd patchwork texture overlay, adding depth to every single pixel.

I can tell which overlays and filters they used in photoshop to create it, it`s such a creative approach and i`m suprised nobody stumbled upon it sooner.  being how it`s a horror game, the textured look of the game is probably designed to act as a little, unnerving detail. like the game is reaching out for you.

I`m personally a huge fan of horror games (and sprite games obviously) so it goes without saying then when i actually find some money,i`ll be picking this up. shame it did`nt come out earlier, could have done a fantastic case study on it.

I think the two work really well together because sprite art has always lent itself well to abstractism and ambiguity. two things which accentuate the atmosphere in horror games (see, silent hill`s mushy,faceless monstrosities) here`s a quote from destructoids review of the game saying the same thing

“Although graphics are rudimentary, the atmosphere is absolutely stunning. Environments look suitably grotesque and the creatures manage to disturb despite — or perhaps thanks to — the lack of detail.”

“And the retro-style graphics actually made the lurching, screaming things that went [sounds of blood spewing] in the night even more frightening, simply because the lack of details made them appear even less human.” 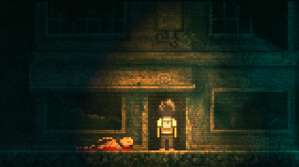 I wish I could find links about this game, but as the case with many indie titles, there’s a lack of publications examining it/reviewing it for me to dissect. these two were the most prominent.

a few posts back,I mentioned briefly a SNES game called `nightmare busters`. which is special, because it`s being developed in 2012 and coded onto actual production cartridges as a 70$ limited edition. 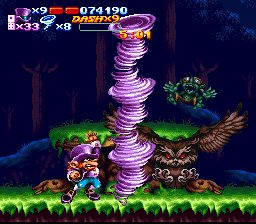 nintendolife.com have an interview with the founder of the project, Brandon cobb.

“NL: You recently confirmed that all 600 pre-order copies have been sold. What do you think attracts such a positive response to a retro product like this?

BC: These people know a great product when they see one. There’s a good reason we waited so long to pursue a project for the SNES: we wished to make a grand entrance. I only had to glance at a muddy screenshot of Nightmare Busters to realize, ‘I must have this.'”

the reception for the game has been outstanding, considering it sells for as much as a full priced retail game in the states. so the market is definitely there for retro consumers, and this little heard product is a solid example.

there`s not a whole lot of `neo` to this retro product however. and it doesn’t seem like that will change anytime soon.

“NL: With these titles arguably occupying a ‘niche’ market, have you considered producing low-cost digital alternatives to these physical copies?

BC: We’ve considered digital publishing several times, but it just wouldn’t have the same panache. We’re out to give people new games for classic systems, not new games in a classic flavor, for a current day system. I think if anything, we’d do a digital release of one of our PC (DOS) titles, because asking people to go back and buy heavy, old computers to play these games authentically is perhaps asking a bit too much. But, we’ll see…”

so these guys are on the complete polar opposite side of the neo-retroism spectrum as opposed to someone like, gaijin games. (who are measuredly more modern than retro) there’s a lot of variables in this field, but I think nightmare busters qualifies as neo-retro.

next game. super time force from capy games.(the guys behind sword&sorcery) here`s a video explaining the premise and gimmick.

the art style is very sharp, it`s not ashamed of it`s retro nature in the slightest. aside from wearing the retro visuals on it`s sleeve, the gameplay looks to be contra-levels of hard also. but the coolest things are the modern features.

everytime you die, a ghost of yourself is spawned alongside you at the beginning, so they will accompany you and act out what you did last life(such as killing enemies) acting as a really gradual difficulty diffuser. I say gradual, because apparentley it`s possible to have up to 500 ghosts trailing you. (hence why it`s on xbox and not ios) now that is something which never would have been possible on retro hardware.

that and the sheer scope and detail in the environments and number of projectiles/effects on-screen at once.

here’s a glowing excerpt from a 1up preview which really defines the positives of neo-retro design.

“Complex games have their place, to be sure, but there’s something wonderful about a game that can lay down a few simple rules and find new and interesting ways to put the player through their paces. 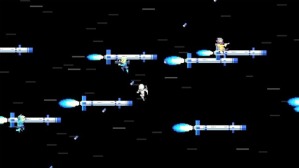 When I sat down to play Capybara’s Super T.I.M.E. Force at Penny Arcade Expo, I experienced a brief mental flash of that dichotomy. I’d been watching others sample the game and marveling at the utter pandemonium on-screen. Yet when the guy running the demo handed me the controller to give it a shot for myself, he said, “The controls are… A to jump, X to shoot, and, uh… that’s all.” Yet those two buttons were enough to forge my way through one of the most insane 2D run-and-gun shooters I’ve ever played. “

another solid example of neo retroism. bringing fresh innovation to the age-old scrolling shmup.turning the typically frustrating wave of deaths into something players actively look forward to. I look forward to it`s release.

there’s one more enlightening article. an editorial on penny arcade which goes into great detail about the creation of retro art (which is funny, considering the announcement that penny arcade episode 3 is being rebooted as a 16-bit rpg, and this post came out a few weeks beforehand)

it`s full of many excellent points.

“As gaming hardware improves and total screen resolution increases, art and animation requirements increase thus demanding more of an artist’s time. As art assets and animation complexity increases, you start to put greater demands on memory and performance thus demanding more of the programmer’s time as well. One such way to reconcile current technology with a limited indie team’s time and resources is through a manageable presentation like the retro style.”

and  by going with this approach, you leave all that memory and programming space to do some very ambitious thing gameplay-wise. not just harken nostalgia.

the style can also bolster character design in a way.

“Pixel art is inherently low-resolution, and as such, there isn’t much room for minute details. You cannot rely on certain aspects of images, such as character faces, to come out on a 16×16 or 16×24 sprite the same way they do on a much larger sprite or picture. Whether you’re trying to show a character’s unique hairdo or facial expression, you’ve got minimal space to work with to convey these concepts. Two common ways to deal with this are to create characters that are visually unique and distinct in their features (hair, eyes, clothing) and their colors (bright, distinct color combinations). In doing so, the bold characteristics are easier to represent since the pixels are large relative to the size of the sprite. By using distinct color combinations, it becomes easier for players to quickly tell characters apart.”

it`s these larger details which help make characters diverse and easier identifiable. all too many times (while drawing normally) i`ll unintelnially fall back onto using small details, so the style`s good for counteracting that.

“pixel art animates well in a lot of circumstances. High resolution art will sometimes look choppy unless it has a lot of frames or a lot of programming special effects layered on top of it to make it look flashy. Pixel art, with its lower resolution and abundance of pixels, allows for a situation where fewer frames of animation can look smoother, due to smaller sprites and fewer pixels to move. Higher resolution art becomes more obvious when fewer frames are used in animation.”

this is something i`ve actually noticed while working with my rotoscoping and patriot art. hence why i tend to use tweens to try to smooth things out.

“Keep in mind that poor graphics are not the same thing as simple graphics – I’d rather play a game that uses an interesting combination of ASCII characters for its visuals but uses them well than a game with high-definition assets done poorly.”

so true. that and technical restrictions by their very nature force the creator to increase their creativity adapt. and they cut down development time substantially .

thats`s all for now. hopefully by next time i`ll have started work on the patriot video demo.