d con is a anime/gaming convention in Dundee (stand for Dundee convention) this was my first year going,and i went as the soldier from team fortress 2. fantastic bit of animation that.

i initially had an entire team planned but everyone dropped out so i was the sole soldier on my own. 😦

i`ve spent this past week non stop working on the costume.this is the bazooka (modeled after the direct hit)

i made from a combination of kfc boxes, toilet roll tubes and a airzooka i got for christmas.

have to admit,it was kind of fun coming back to paints and paper mache. reminded me of the left for dead dress up from last halloween. i chose a bad time to start doing this though,as crit week has just started after. ssoooo not ready for it 😐 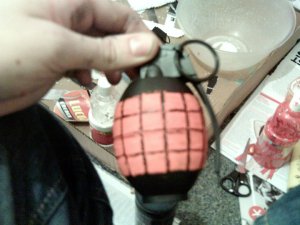 i got toy grenades from a store,which make an actual explosion noise :O and painted them orange,and used black pen for the lines. definitely gonna keep these, they look cool and don’t take up much room. have a feeling i may to trash the bazooka since i have no room for it. sad times. on the plus side, i`m going to try and get everyone to do team fortress cosplay for Halloween this year. so i can make it again for then.

okay enough blah,here`s some photos from the actual event. 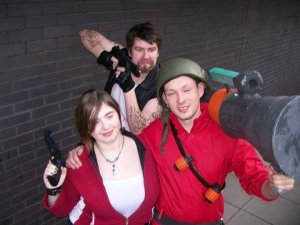 met a sniper while i was there,cool guy,had a jar of jarate. made thankfully from apple juice.

me up on the costume contest stage. got a suprising amount of appluase 😀

and that’s all! was a good test run for my soldier costume, i know how to make it perfect for Halloween now. (namely get a better helmet, i think i suffered brain damage from using one that was too small for my head) now onwards to crit week! ><