David Currie is a fellow student I approached in university about contracted work, I needed music for my honours project animations and I have zero musical talent.

my actual honours project is the study of Neo-Retroism, the merging of the new and the old. the style leering more towards retro 16-bit games, and luckily his honours project was also a nostalgic throwback, he was attempting to recreate the sound of 80`s music using current day technology. not only that, he refused any form of payment because in his own words “I enjoy making music”

I asked for something along the lines of Ristars peppy alien tunes and Metroids ominous tones.  the title screen and score screen all nail the happy feel perfectly and the level anthem is suitably heavy and alien sounding. plus,daves trademark 80`s synth style suits retro videogame music perfectly.

intro song composed by someone else

bit.cops is a side scrolling shoot-em-up much like metal slug or contra but with elements take from modern first person shooters. and with some lethal weapon inspiration thrown in for good measure.

there were 9 levels to score for this and dave managed to create them all and any revisions I asked within the timeframe. I initially wanted just the song but changed very slightly 9 times. because being the music illiterate I am,I assumed that 9 songs over the course of time would have been far too much to ask. but David was more than up to the task. there is an overarching melody which can be heard in the majority of the tracks and a lot of the same instrumentations are used without the songs becoming too repetitive. but each song is wholly unique and recognisable.

any critique I did have on tracks that were a work in progress,dave took on board and incorporated without hesitation.

and last but not least, the Patriot theme

this was also a very technical challenge. I wanted  two versions of the same theme to fit the premise of the game. (being able to switch between HD and Retro visual styles) the HD anthem being very high fidelity and orchestrated with a pinch of electric guitar, whereas the retro song should be the exact same song but with chiptune sounds. all the while, having a Scottish sort of `amazing grace` consistincy to it. it was a tall order but as you can hear,he pulled it off.

I figure the best kind of recommendation would be to tell exactly what caliber and quantity of work dave is capable off, and hopefully this post shows off just that. Dave`s honours projects and skill set was perfectly suited for mine (hence why we`ve chosen to share our exhibition space)  but im sure under any given situation he can tackle any genre of work. 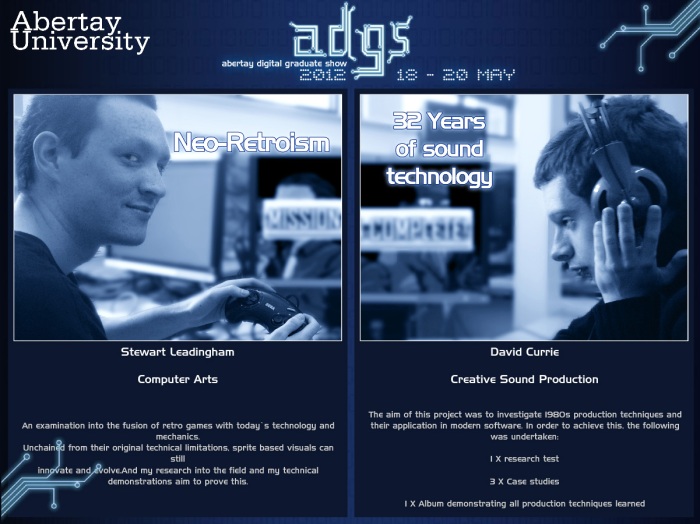 screenshot from the user interface for the exhibition software.