the project aim, head on, let`s get this beast done and dusted, i`ve had some good feedback and suggestions so now it`s time to take those into account and create something.

im using questions and excerpts from robins presentations to help me structure this post and in turn, the project aim.

•Firstly, what is your broad field of interest?
2D game graphics, of the retro 16 bit sensibility.
•You want to develop a sensible aim that will foster intellectually stimulating practice-research in this field Within that field, what further areas of specialism might your research cover?
these are issues I`ve researched (in website articles mainly, still counts) in past posts, during the pitch the question i proposed was too easily answered so it was lacking in-depth. I`ve since seen question up to three sentences long so I was in the wrong mindset limiting mine to one.
i`ve got to think of an aim which encompasses all of the above areas of specialisation.
keeping in mind the danger that my questions too easily answered, my project aim could be investigation or exploration based, but then there`s the wording of the question to take into account.
regardless my new refined aim is
Explore the use of 16 bit graphics as a means of stylization and a mechanic in modern videogames,media and culture. And develop a interactive piece based on my findings.
or
examine the use of 16 bit visuals as a means of stylization and a mechanic in modern videogames,media and culture. and subsequently create a game based on my research
potential question so far is  “how can retro visuals be developed beyond their original limitations“
(annoyingly nearly every example aim i`ve seen so far starts with the word `explore` but maybe for good reason)
why 16 bit? because I feel it`s the perfect balance between style and aesthetics, lower res and it wouldnt be attractive enough. too high res and it would lose it`s identity as distinctly nostalgic.
and when using the word stylization, I mean using the style of 16 bit graphics. no the limitations they had on their initial hardware.
hopefully it`s the right level of wordy, i`ll try and get some feedback from my tutors regarding the aim and question.
okay moving on, to pad out this post a bit, i`ve uncluded some concept work for the other bit cop character and a sketch dump. 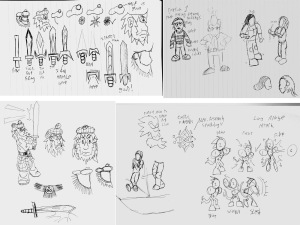 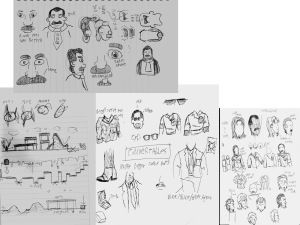 cheap and nasty doodles done during breaks.
did a fair amount of concept art for the good cop, I feel like i`ve got his style set now after working on these. obviously in his sprite appearance he wont look anything like the regular drawings seen below, but it helped shape him.

cartoony portrait of him flashing his badge 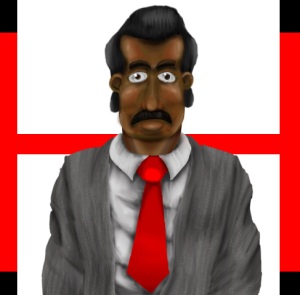 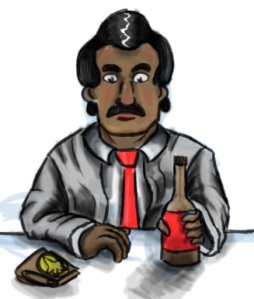 I think the colours used in his design work quite well. brown and red are used on the Budweiser label.