in 4th year we have 4 pitches throughout the year proposing out honors project, did my first one on friday. did`nt go that hot. I sped through it and rambled, I did`nt make a presentation, instead i got anxious and made lot`s of blog posts beforehand hoping it would be padded out enough and then I could in-depth on everything i`ve posted, but yeah. maybe make a Powerpoint next time.

I just was`nt sure what i was meant to be proving,I mean I`m not even 100% keen on my aim and question, i`m having a meeting with Iain on monday to iterate it further and make some progress. in the meantime to chillax i made a pixel animation and did some research 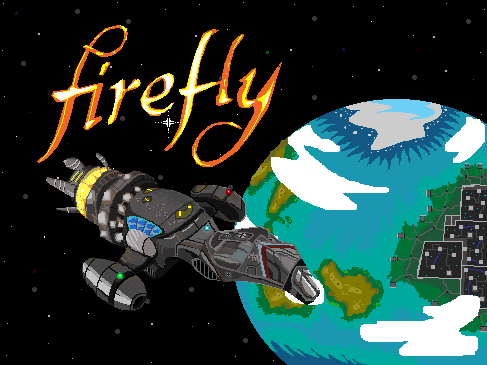 yes I caught the firefly bug

I know I`m extremely late to the party bought I got round to watching firefly and serenity and my god am I depressed now, knowing it`s all over 😦

also, made a pixel animation. since I need practice in that aspect.

music is`nt mine, but it`s really rad isn’t it?

hardcore browncoats will notice a few `off` details but meh, I needed sound effects to make it more interesting.the music was kindly supplied by YouTube patron sparko98

love the movement of the dog

here is a video, i`ve included for the sake of inspiration/it`s cool. not too much i draw from it for the sake of research as it paints games in a bad light “get real,get outside” but it is trying to sell us garden accessory so i`ll just appreciate the pretty visuals.

it`s “pixellisation” is in the same 3D style as 3D dot game heroes. not sure which adopted the look first but here is another video i found in the same style

and thankfully, it`s not trying to sell us anything!

this style of 3D graphics, combined with photorealistic lighting effects looks extremely slick and stylish, it`s  pity we don’t see it more. must be a unique challenge to create these sort of visuals using 3D tools.

so yes, I love the look but the actual dimensions of it is`nt for me. im interested in 2D but these are great examples of the sprite aesthetic bleeding into 3D graphics and also real life CG incorporation. the aesthetics clearly resonates with someone.

for the record this video is fan made therefore fake. but the concept is cool

seems well implemented to me!

it`s only a trailer so obviously I`ll hold my breath for the reviews. but i think for that metal slug tech demo to work, it would need all of the technology of the psvita (or the Wii u, they may include an outward facing HD camera it`s not released yet.

it has the motion sensing prowess of wiimotion plus which is nice) and an outward facing kinect to detect the distance of environmental objects. pretty damn tech heavy. but it`s cool to think about nonetheless. it would sure give level designers an easy job 😀

i like the fusion of advanced technology with nostalgic visuals, it seems like an ideal testing method for unproven hardware (once I see a  augmented reality game with a 90% or higher on metacritic, that`s my definition of `proven` still waiting on that kinect game) as of lately I feel like, augmented reality is better suited for information and accessibility technologies, but once the technology improves (which will be soon I imagine, the speed this industry moves at) the same thing will happen that happens with every bit of fancy new hardware. more people will start making games for it.

so that`s my summary as to why I wont be using the tech in my honours project, I may experiment with it if an objective or method calls for it, everything is still unrefined at this point.

included for the sake of it being cool

a pixel video done in the style of Atari 2800 graphics (but with no animation or palette limitations quite obviously) i`m going to work towards finding out more about this video. i`d like to know what tools the animators used or what self-imposed limitations they worked within.

they struck a good balance, all the while I never lost the illusion that this was possible on a home console. maybe a quality inherent to immersion. something to think about. is it possible to become immersed in an era? I certainly feel like i`m playing on my old mega drive when watching the goldfish hit `we come together`

took a look at another pixel tutorial. and created a little icon for fun

was actually really helpful, realised that I should actually be using the standard limit of 256 colours instead of whatever I happen to land on in the palette selector. getting these damn things to animate is hard, as you can tell by all the compression on the animated gifs I upload here and supposedly working in the 256 restrictions fixes this problem.

this one seems a bit better though, I drew it in regular rgb mode then indexed it to 256 colours and got some new weird pixels. index mode apparently doesn’t have layers however. need to look into that.

sprite animation can be such a fun process because there`s so little creation involved in making idle animations, just manipulating existing layers. it`s a fast process which allows for fun experimentation.

i`ve bookmarked an interview with one of the craters of aquaria (mentioned in a few blogs back) and there`s very noteworthy back and forth between him and the interviewer.

It seems like a lot of the people that are making the interesting games now that have the cool chunky graphics like Spelunky or Cave Story, maybe those people who got older and are now able to make video games are actually like, “Alright, I wanted this, and nobody’s making it, so now I’m going to make it.”

DY: Yeah, I think that’s definitely true. The thing is I love graphics, so I think they should be a priority, but [the problem is] when it ends up taking over the entire development. 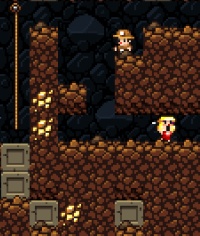 But, yeah, I think the kind of nice thing about indie games is that they can move sort of laterally as opposed to always kind of jumping forward with whatever the latest kind of technological advances are.

i`ve mentioned these issues in previous posts. the resurgence of retro development, since the retro gamers are now the one`s making games and they can call the shots, indie developers even more so.

his game spelunky (pictured above) is quite pixel tastic, but the xbla update has some cool features like multiplayer and the obligatory visual overhaul.

now, this next link is hugely relevant. it`s a interview with the producer for mega man 9. a textbook example on a modern/retro game. here are some relevant snippets.

Essentially, this game isn’t actually a Famicom game. If it were burned to a cartridge, it wouldn’t actually run on a Famicom. It is a duplication of the Famicom capabilities, but within a modern game engine and technology.

HT: Well, when you put it that way… (laughter) This couldn’t fit on a Famicom cartridge. It’s too big. It’s too much for that. It’s really emulating the old style of games. But we’re hoping that when people play, they feel the same nostalgia that they have when they play the original games.

now this came as a shock to me. when you notice the flickering of sprites in this game you cant help but think it`s a port of a NES title. i guess they were really good at keeping the retro illusion

Koji Igarashi, who is in charge of the Castlevania series, is a very strong believer in 2D gaming. He also likes to make sure he can cultivate these design techniques in his staff so they’re not lost. As we talked about, this game features design that hasn’t been done for some time. Do you think it’s important to keep the classic style of designing games alive? Do you feel there’s something intrinsic to that that is important to preserve and continue alongside things like next-gen games?

HT: I like to think of it not as an 8-bit style, but more of an artistic choice, if you will. It’s another type of creative expression, because nowadays, everyone wants surround sound and 3D graphics and things like that, and they get too caught up in that.

I don’t think it should be that way, because you could do an 8-bit game. You can do a 16-bit game. You should do whatever is creatively expressive and what you want to do.

I think that will open up the whole gaming world in general, by being able to have these creative outlets.

holy crap. that right there. i`ve been saying kind of stuff since the beginning. i`m glad to know a major studio like capcom is incubating these older methods of art for the new generation. here`s hoping the market stays interested and these skills can continue to grow alongside conventional methods.

now this is an interesting hybrid of styles. a lower red game of an already sprite based game. I think this is a colourful demake of metroid 2 .(or it might be an upgrade since metroid 2 was on the original gameboy) I love the music in this video but i`m also fond of some of the visual tricks at work here. the screen shaking when an enemy dies is reminiscent of the second pause from 3D Zelda titles. gives the combat some `oomph`

they show off some super slick control skills which is all the more impressive considering the microscopic resolution the games running in. samus looks like a baby character, her run cycle looks a little silly. but things like the bitty fog and the moody environments let you know it`s a metroid game through and through, a very attractive fangame.

I`m only halfway through all the research i`ve compiled but i`ll save some for next week, it`s sunday and week 5 starts tomorrow. i need to get my stuff together for speaking to Iain tomorrow and polishing my aims, and hopefully have some more original art to show next time.