In the time between the last post, I’ve worked on enough things to compile nearly three posts. So there’s obviously gonna be alot to cover here. The majority of this post is small bits of fanart and a summary of my site design and youtube projects. Next post is gonna be a bombshell of a reveal of our double rainbow project, so I’m saving a lot of the game content for then.

But I’m uber excited. it is the first commercially released game I’m involved with so go on, have a sneak peek. 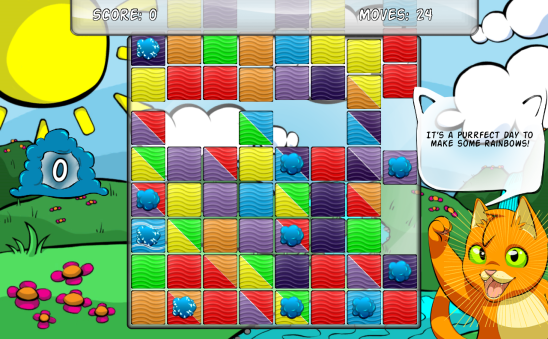 This game has so many cat related puns it hurts. our QA testers just keep dropping.

I had a lot of Pit, kid Icarus sketch’s lying around so I touched one up into a semi realistic piece with no lineart. It had that same problem as similar pieces where it can look a little strange zoomed out, but closer inspection has lots of lovely texturework. So I recommend clicking on the picture and having a little investigation.

I was on a serious kid Icarus uprising binge a while back. One of my favorite games.

And speaking of indulgent fanart, I did a little sonic picture. was just a quick and cheap screenshot recreation of sonic 4 episode 2

It`s from one of the more popular levels of the game wouldn’t take much googling if you wanted to see the original source. also no tails. he sucks.

And a speed sketch of y-fronts man, since it has been a long time since I drew him.

Tried it without the eye mask. Not a fan so i`ll have it on next time.

MOre videogame fanart! this time, an untouched franchise on my behalf. metal gear solid! I had a fun idea for a service I could offer on my commission page. a codec style transmission. I can create an animation sequence with supplied audio and character ideas/photographs. here’s a few still examples. 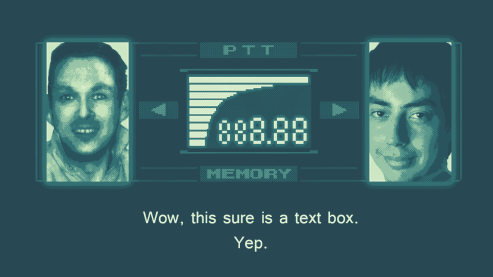 I initially tried redrawing the photographs into the yoji shinkawa style. but whoa boy did I crash and burn hard. I’m not even going to post my tragic attempt.

I would also show off the animated version, but i didn’t want to litter my youtube channel with practice work, and wordpress has no options for video posting/hosting or even storage for swf files 😦 despite coughing up the money for a membership.

If you’re at all interested in these. you should check out my commission page.

Ahem, sorry about the selling out but ya know. jobless.

One of the youtube projects I’m working on is a lets play series with my good friend Jordan Smith. The channel dubbed crispysinger plays is here.

I’m not actually involved or recording of anything as such. (I’ve got enough to worry about with legend of fail. I have two episodes queued up for editing) I’m actually supplying logo work and an animated opening sequence. Here’s a still of the intro. 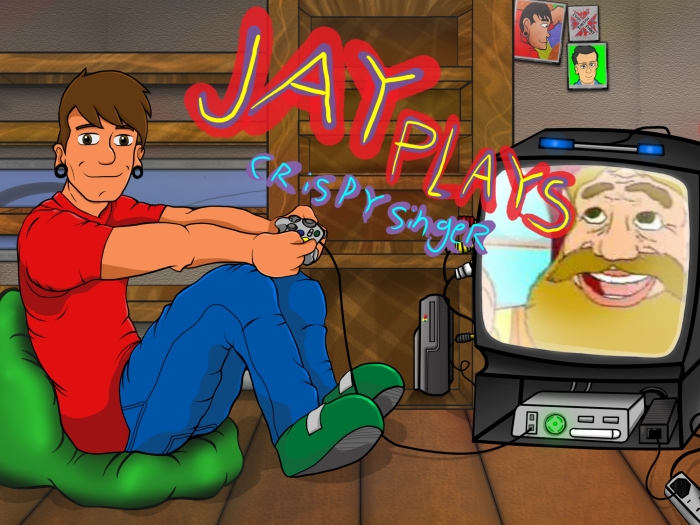 The animation in question will be him thrashing his thumbs on the gamepad, talking, turning his head. and various other snippets in the scene along with zooms, pans and logo flybys.

The scene is going to have a lot of easter eggs, such as a variety of consoles on the shelf’s (depending on what game is being played) figurines/trophys/memorabilia of past games. perhaps different attire/hair/tattoos. I kept the base files super neat and tidy so I can iterate the scene over a long period of time. It`s going to be an interesting approach, usually when it comes to art its more a fire and forget mentality.

And here’s the logos. took me a few attempts to get it right.

I think me and jay are torn between the bottom two. Lots of Sonic inspired fonts in here.

I was getting a bit annoyed trying to nail the style, cause I’d recently made a cracking logo for team tartan paint which I’m immensely proud of. But as I said, the crispysinger project will be a long lasting iterative process.

Once more onto the topic of Sonic. i.e the most common tag on my blog most likely. I finished up the opening sequence for Feliks fan game. I’m not sure what the official status on the project is, but regardless I pumped out this animation and I’m super chuffed with it.

Didn’t compress it, so it took 4 hours to upload this 10 second vid. wowsers.

Here`s a couple additional assets from the final animation. 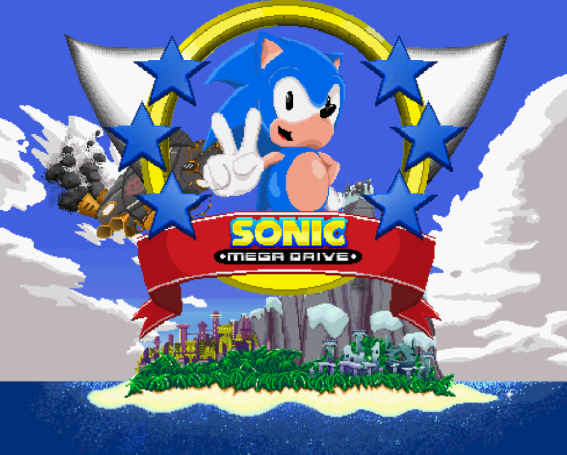 As you can from the flood of media. I’m very happy with how it came out 🙂

last subject for the post, a pretty big announcement. I’m having a website developed thanks to the aforementioned Jordan.

Work in progress I must stress. aspect ratio needs adjusted.

the domain www.stewartleadingham.co.uk will act as a landing site for this blog. It`s essentially window dressing for my blog and youtube to woo employers. god knows I must be doing something wrong at this point.

It`s soaked in mega drive era aesthetics and it has lots of easter eggs to boot. The DS will change status if my job status does. the carts change depending on what page your on and there’s a konami code treat 😉

Next blog will be a game launch summary of project double rainbow (that’s correct. still no final name, oops) and after that, most likely a post about the website and what progress I’ve mad eon the youtube animations ( I totally forgot to mention faisal’s glitch play series! maybe next time)