did some more book reading, went through this little beauty

it had some great art but it was just that. there was about 5 pages of text devoted to talking about the authors history with games but he made no mention regarding retro visuals and many of the images were fonts and photoshops so sadly nothing for me there.

bookmarked another book I spied on amazon

this one is devoted to all the various styles of pixel art so it sounds quite interesting but I don’t think it will have a lot of documentation. seems to be a recurring problem in my field, i`ll just have to pour that much more effort into practice based research.

speaking of which, according to my plan proposal im planning to do game reviews this month. i`ve started on superbrothers so i`ll press on with that and then blog about it once i`ve finished it. i`m thinking a week should an adequate amount of time being how it takes about 3 hours to complete, there’s also lots of other things that need doing like my crit presentation for next week and supposedly refining my project proposal despite having zero feedback so far.

I think the biggest problem thus far is the lack of literature in my field. I`m being highly thorough with whatever I can find on gaming websites but I need some quality articles, i looked through all of the aforementioned books in the previous post looking for even a passing mention on retro graphics or some sort of detail regarding development with them.

i`m grasping at straws, i`m thinking about looking at the history of film noir to see how the genre has evolved and settled and (try to) make a comparison to retro graphics. but the definition of `film noir` gets really muddy and a bit too expansive, some genre critics feel that films like `the dark knight` and `inception` are `neo noir` so it deviates a bit too far from it`s retro roots, unlike my research comparisons in which the games i`ve mentioned try to stay in the established aesthetic. (if there were more modern films in a black and white style it might have been comparable but i`m not finding a whole lot, something i`ll have to look more into.)

speaking of aesthetics, here is the 16 bit version of the patriot level

just need some characters to populate it now

now that I have a better understanding of parallax scrolling I was able to shorten the workload by only drawing amounts of layers that would actually be visible. 🙂

I`m not that happy about the backgrounds though, I feel I got lucky with the original version and it happened to blend nicely. i should do some colour tests along with blocking prototyping before final artwork. the next scene is the underground caves, but i`d rather make characters first time constraints depending.

I recently spied an article on gamasutra talking about the importance of chronicling our gaming heritage. it goes into detail the difficulty of documenting digital only media, like online multiplayer and downloadable content. back when I was first composing my aims, I said that 16 bit graphics should have a stronger representation in our medium and little is being done to reinvent/update them so they stay relevant and archive their history. here are some quotes from the interview.

I think history is important. As George Santayana famously wrote in The Life of Reason, “Those who cannot remember the past are condemned to repeat it.” If you look around you, it’s clear that we are actually doing a lot of repeating nowadays. As the game industry prepares for 3D in the browsers, and we watch the increase in quality of games on smartphones, and even as one looks at the increasing complexity of indie games, we can also see a lot of people making mistakes that were solved during the 32 bit console era, or earlier.

it doesn’t go into detail on what these so-called `mistakes` are, but it`s an interesting statement nonetheless. brings up the relevance of the earlier years of gaming.

Museums can often be static and sterile, but games are vibrant and interactive. There needs to be some care put into their presentation. In the case of game collections, rare artifacts can be presented with videos, screenshots, and most importantly context. There’s no easy solution that would allow people to play them, but putting a game in the context of its time period (i.e. it influenced this, popularized this graphical technique, broke this unspoken rule) would help preserve its legacy, or perhaps introduce it to those who didn’t know the game in the first place.

the berlin video games museum I spoke about briefly in an earlier post adapts this to some degree, the interior aesthetics are more `general` video game themed then era specific. and the idea of showing the legacy of an era would be an interesting endeavour. the improvements made in the 16 bit era are far-reaching indeed.

there are a few modern touches I can spy from the trailer, such as some sort of mouse/pointer control for carrying a passenger (reminds me a bit of when tails used to carry sonic the old titles) and a high quality orchestral soundtrack. there may also be some voice acting to complement the high quality music. it has a very strong sense of style, the visual style is unmistakably inspired from the 16 bit era but running at a bigger screen ratio to fit more level on-screen at once. but the individual art is roughly the 16 bit res.so a pretty brilliant example and a game i`m following closely. it`s a pity it wont be released soon enough for me to do a game review on it.

it also embraces the 16 bit visual style and has a very fun looking physics based mechanic where other players try to knock each other down to the ground. i doubt 4 player physics based gameplay could have worked on the 16 bit hardware so this is another good example.

16 bit games have a tendency towards certain genres, survival horror games were never that popular back in the 16 bit heyday and thus not a huge amount were made. I really do feel that it was a result of the hardware or the opinion of the industry. of course, this was a long time ago so people didn’t take video gaming in general all that seriously, so it was deemed more of a `kids` hobby. and so obviously there were a very slim selection of adult themed games. the few that come to mind would be violent hack and slash games like splatterhouse or mortal kombat but these are more provocative and eager to be controversal then they are adult in the same sense, a complicated well crafted story is.

with this in mind, a new game for the Playstation network called corpse party sounds very interesting

despite the quick cut editing to show off the violence, it is actually a slower, story driven affair. much like a spritey silent hill.

i`m a big fan of horror games and even more so when they’re presented in this fashion, and free from the trappings of conventions from the era, 16 bit horror games should be developed and explored more. another innovative example of marrying the old with the new. (possibilities)

superbrothers: S&S is next on my list of objectives, and the developers (capy) have recently shown off their next project. a retro styled shoot em up with loads of sprites populating the screen and some unexplained thus far time travelling mechanic. needless to say i`ll be keeping a close eye out as they have been the model developers for my field of research.

i`ve mentioned before about the retro style bleeding out into other mediums and being the most used style representing our culture, there`s a museum in new york featuring art based on the talk show host Conan o brian and there’s two pieces which caught my eye. 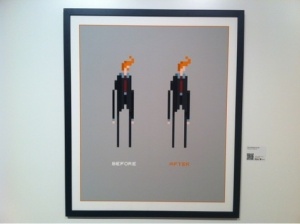 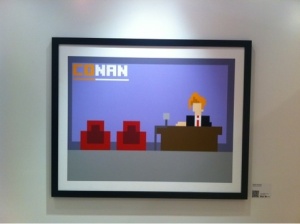 the first image is very reminiscent of superbrothers: S&S, the tall sprite with stylishly skinny proportions. the second looks more like an Atari graphic (but with a much larger palette obviously, and cherry picked resolutions, (compare the res of the sofas to the hair) I don’t know what these pieces are designed to represent as documentation on the event is nowhere to be found online. but it`s still fascinating to see game graphics represented in this gallery, which is seemingly worlds apart in relevance. (has there ever been a Conan o brian video game? of course not)

obviously I`ve talked aplenty about visuals so far, but i think retro music deserves a mention as well. gamesradar has an interview with the composer of the new cave story 3D title, and he talks a little about maintaining a balance between the two styles.

The WiiWare version had a huge backlash because people weren’t feeling the music. I think they learned from that. They gave me more freedom than they gave the other guy. The other guy had to redo it with midis and midi sounds, and that’s difficult to do. In that position I wouldn’t have made a very good soundtrack either.

DB: Yeah. More like half-way retro. Like it’s not completely retro, but it’s not new. When it comes to how I did the tracks, it was basically to keep the composition and arrangement the same. Whenever I’d deviate at all Pixel just wasn’t having it, which I completely understand. But I kind of occupy this niche, it’s like 12-bit music. It’s fully, CD quality “real” music that has this old-school sound to it. I think it has to do with the sounds that I choose. Like, the Super Nintendo sound chip is like my favorite sound in the world, you play anything through that chip and I love it.

he admits to cherry picking the best elements from old sound effects to incorporate into the new songs.

the visuals are also coming along nicely in this remake

I can see how retro music could be grating to some people, but this fusion, to me. sounds pretty fantastic. there are already a lot of musicians who compose using this style (Anamanaguchi being the most famous example) and i feel that, retro visuals will also benefit greatly from the same selective mixture.

that`s all of my links detailed thus far. i`m sure i`ll compile more before long. got some books arriving soon so hopefully that should give me some literary meat to work with.

non uni stuff below this line

don’t worry I wont make this a regular thing 😀 god knows the internet is already flooded with `unboxing` media, but this was a special case. 90 quid for all that jazz was a pretty good deal in my opinion! best birthday present ever

the one bad thing, it got imported from god knows where, and because of that. the `making of DVD` is only one language, and whatever it is, it isn’t english 😦