okay it`s the beginning of pitch and crit week so I should probably get round to writing down my project aim and question.

had a meeting with Colin last week to ask about wording for my question so I could end up with the least social work/ more practical stuff, he did however suggest looking at people’s perception of the style and even went so far as to label the graphic style `ugly` at points :O a misunderstanding I would like to change/ look into.

he also mentioned that different age groups will feel vastly different to the style so that`s something to look into, perhaps use an original game creation to compare vector/sprite graphics to different audiences, but obviously all of his suggestions veer even more into social work. he raised some good point`s but I had another meeting with Lynn to balance it out.

she was a lot more topical about the subject and even brought some highly relevant issues into the discussion. sprite graphics could be used to create a higher emphasis on gameplay, and even decrease budgets. a worthy cause for todays troubled triple A industry. (realtime worlds)

the industry woes might even be linked to the retro renaissance happening lately. it`s cheap,affordable and requires small teams. and obviously attracts the more hardcore gaming crowd, after the casual/social gaming fad is over, it`s those guys who will keep gaming viable and franchises alive.

I myself am a fan of sprite games but I do think triple A games obviously great too and needed. it`s a matter of balance, in an earlier post I attended a `other ocean` lecture which was founded by a leader who had previously spearheaded about 3 companies beforehand, all of which were succesful. and his business strategy was to simultaneously create a few smaller games alongside the bigger projects. a solid business strategy i`d imagine from all those years of experience.

i think this mantra could also be applied to my sprite research. the more input i`m getting from everyone, the more im getting hinted towards making that game concept i had earlier,the one with sprite and vector graphics both in play for various game mechanics.

later in the week we had a guest lecture on friday from a graduate student who created a fake internet celebrity to rope luckless victims into doing work for her 😀 a fascinating study into the fame obsession of the human psyche, she also mentioned a local company called fleet collective who have people create art for it (for free) but it ends up getting used for marketing material for various events, so in turn, it`s a solid place to go get a reference or even some industry experience. if I had known about it during the summer i so would have looked into it. so maybe once I graduate i`ll take a looksie.

here`s a mind map I created, but not with my own ideas. with suggestions from tutors, well, the ones with blue I may have had an influence on.

as you can see, getting ever closer to my intended concept.

now using all of the information I`ve gathered over the past few weeks, I ttttttthink I have an iterated version of my previous question and aim 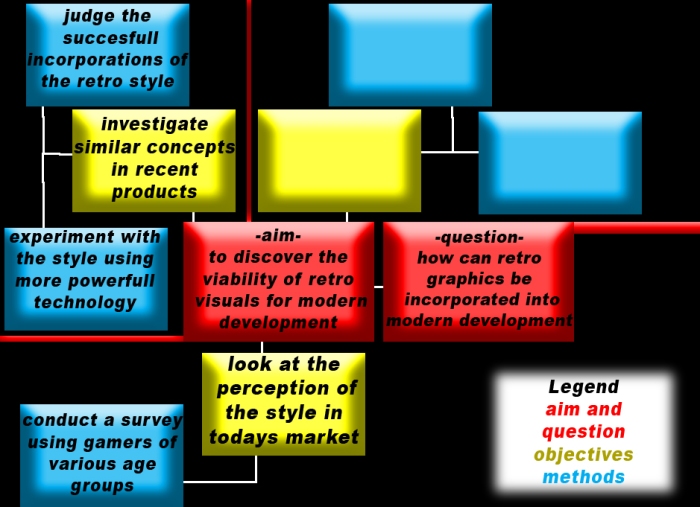 still a fair chunk needing filled in. hopefully I can extract something useful from the first version. having a lot of trouble getting this finalised. glad to hear that they keep changing untill a lot later on in the year.

speaking of things going wrong! oh god this xenoblade video project has been driving me nuts. the first problem was that I have a new TV, and it doesn’t have a single output port on it like my old one did. the old TV was some kooky korean brand I had never heard of and the image quality was crap, but it had a shit-ton of ports at least. it took two days of messing with cables and all the devices I could experiment with in the house before realising the game needs to output at 50hz for screen capture ><

but luckily! I now have all the footage I need (albeit in dreadful quality, hopefully some borders and picture in picture will distract with that) and the audio recording of me and the legend of fail team waxing lyrical about the game. I have one live action skit involving a fake furnace.

I storyboarded skits for nearly every aspect of the game. but I`m having trouble fitting everything in the 10 minute time limit so I think I`ll just use the oven gag. depending on the rules of the contest I may or may not upload it online, regardless i`ll be glad to have it out-of-the-way so that i have a chance at winning some games and a ton of publicity for my YouTube efforts.

and then I can go back to making the Halloween costume and conceptualizing ideas! speaking of which

another enemy for patriot. I could swap the haggis/bagpipes name with this one and make this the `flying haggis` or if I kept it `flying supper` I could use chips as a particle effect from it, like it spews chips from it`s rear to keep itself afloat 😀

a rough doodle of the patriot character. I think I have all the highland warrior clichés in here. I may add some insane leg and arm hair to ramp up the manliness factor. if I draw him again it`s gonna be an action pose with him attacking enemies or generally slashing with his sword ~ something else that needs to be conceptualised further. 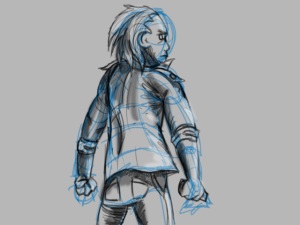 done a lot of concept drawings for the wild card cop from bit cops. the proportions are a bit wonky here but he exudes the character im trying to capture.

some silhouette piccies. these are really helpful for defining the character. 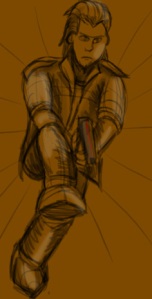 just him running along, possibly to bust some bad guys. 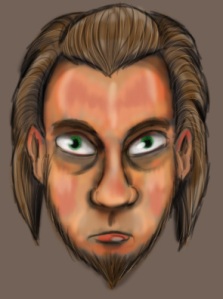 more defined close up his face, did this one last and I think im happy with the character now. iterated it a lot and now I want to try adapting him into pixels.

before I forget, made some mood boards for patriot and bit cops 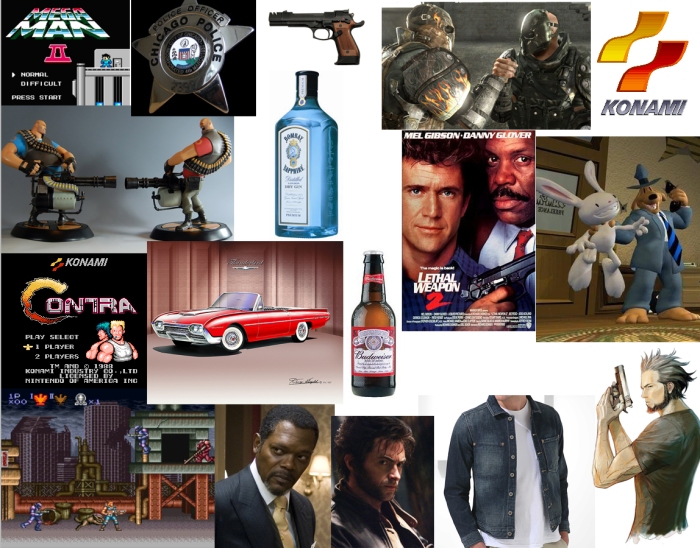 hopefully you can guess which mood board`s which

these are elements i take inspiration for, for the first level & character

now I`ll move onto defining the black cop some more. he`s more straight edge so I cant really make any action images for him, maybe a family portrait or an epic shot of him filing paperwork in the office.

oh and before i forget, the revised personal statement

i`ll be making another post later in the week to summarise pitch and crit, and hopefully have an update on the concepts/xenoblade situation!