one last quick lit review before pitch and crit starts this week.

I`ve been making `film noir` comparisons this whole time and I finally got some books on the topic, but my findings weren’t exactly what i had in mind.

went through the chapters detailing `noir` genre.  it talked about how noir has diverged and helped form the basis of many other subsets of genres like neo noir. the author says that noir is rather difficult to categorise because of this. 16 bit visuals don’t have the same problem, because you can distinctly tell when it is a 16 bit game, and i chalk that up to the fact that it`s a visual style. even when games with retro visuals use modern touches it`s still easier to define.

one quote in particular from the book

“As a single phenomenon, noir, in my view, never existed. That is why no one has been able to define it, and why the contours of the larger noir canon in particular are so imprecise”  Steve Neale (2000)

some articles I`ve seen on the summon resource echo the same sentiment. which leads me to think that my initial comparisons between noir and retro graphics are now nonexistent. many elements from retro gaming have (obviously) formed the basis of modern gaming, but unlike noir. 16 bit gaming can be easily defined. it`s a game which has a 16 bit colour palette. I believe the term for games that use the style but with modern tech would be `new retro` although there may be more definitions. something to look into.

the movies as history

it did`nt have as much on noir as i`d first hoped. it was more social commentary on films made in certain eras, what effects the social circumstances of the time had on the movies and vice versa. nothing on the evolution of genre, the previous book covered that.

when I initially compared noir films to retro visuals, I believed that both were timeless in a way, or at least age gracefully. like a well crafted 2D video game or a classic black and white flick.both genres do branch off into many different styles but this is where the parallels end. there are simply next to zero old-fashioned noir films coming out nowadays so perhaps they didn’t age quite as well as i`d first thought.

read another book but it proved equally as unuseful 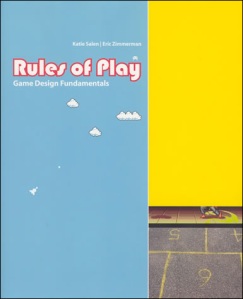 I was misled by the attractive cover with some sprite art. it`s very strictly about game design and nothing more. like all the other design books i`ve mistakenly loaned thus far, it draws many, many comparisons with chess. and doesn’t talk nearly enough about using restrictive visuals for design purposes.

I did a bit more reading on some of the magazines in the library and came across two mildly relatable quotes, the first one is about the team behind joe danger

“This of course, is just the way hello games does things. After all, the four original founders created Joe Danger, a hybrid racer-platformer with an infectious sense of 16bit fun, on their own with a proprietary engine and self published it on PSN, becoming one of only two such releases on the platform”

it`s interesting that they say this, because in my case study of bit.trip beat, I note how the game squeezes every possible use out of it`s small array of mechanics, and from what i`ve garnered from reviews, joe danger does the same. i`ve not had the fortune to have played it but it looks like a fun little game. visuals are irrelevant to my research but it`s interesting to think that “16-bit” could be more than just visuals, there`s a `feel` asscociated aswell.

In `game developer` I learned about ainteresting indie game called `cave` with an experimental, interpretive narrative much like `passage` here`s a quote about the development of the visuals.

“Theres a great expressive piece of animation in cave whenever the girl climbs over a ledge. can you tell us about creating this simple, but very effective movement?

PL: the animations for cave were inspired by games like `out of this world` and `prince of persia` whereas both these games used the simple but elegant solution of rotoscoping real actors, it would be pretty pointless for a 10X20 sprite. for cave I did all the animations pixel by pixel. The animations were originally going to be maybe four frames but somehow ended up being 12. I really do enjoy the way smooth animations look at really low resolutions. the process of making all the animations was pretty quick though since the resolution was so low. in total i spent no more then five hours making the art and an additional 15 trying to export it to the right format. I must brag a little here though; it`s quite a challenge when a pixel is the difference between a flat face and a massive nose”

played through the game myself and had a different idea of what I thought was going to many others who had also finished it. it seems like the low production stress of retro visuals is perfectly suited for one man development teams who have innovative ideas that they want to quickly develop.

that’s all for now, I`ll be consuming more library information throughout the week and i have a pitch and crit session to manage and a presentation of my own!