this module seems like a crossbreed of 3D production design and character animation. the beginning had us watching a lot of Disney cartoons and learning about the appeal of characters and how game characters are created. it`s fascinating stuff. conceptualizing a character is always fun and i went a bit overboard in the beginning. the actual requirement of this brief is to conceptulise a character.make a story and create a 30 second 3D animation.  I`ve had the idea of a `cleaning musical` stuck in my head since the very beginning of this module. it was the first idea that came to me and i`ll craft it fully someday but for semester 1 of this module we only have to make an animation using one character. so a 5 person musical will have to wait for a while. the character i chose was the shaggy mosher one.

I was trying to encompass a `student` feel for my characters. so i thought to myself “what defines a student? how can you tell when you’re looking at one?” I had a huge list of words lying around that I cant find anymore. it had things like `stupid haircuts,shoulder bags,chequered shirts` to be fair,this was just stereotypes from myself. but i am a student so i guess it applies.

the rest of the characters will have to wait untill semester 2 to be brought to life. luckily for me the body shape isn’t too different between them all so that should save me some time on modeling. I choose the first character because he seemed best suited for my revised script. (the original was him and a friend lazing on a sofa then one of their girlfriends would come in and tell them to clean the house. they would dismiss her but then she would turn on the radio and queen would start blaring . they would grab cleaning supplies and start dancing to the music while cleaning the apartment.) the script for this one person animation,is about one guy lazing about. and then suddenly his phone rings and he can’t find. it`s not going to win any Oscars but it`s cheery and mild slapstick. I want to go for the Wallace and gromit look so i`ll definitley use geometric lighting in the final rendering and as clean textures as possible.

so far the model doesn’t have any hair or textures.(the UV layout is a nightmare 😦  im going to need help when it comes to texturing him) I plan on giving him two hair models. one which covers his eyes and one that doesn’t for a simple transition at the beginning where he wakes up. it`s not going to tween up into the sky cause that would look strange. i`ll do a one frame snap to add to the shock of the phone ring waking him up.

here’s the hand for my character. less fingers = easier to animate. that and it fits into the whole cartoonish,exaggerated aesthetic. 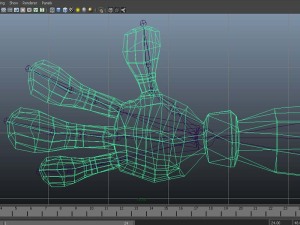 this is my skeleton for the model which i`ve had the fortune to have made twice now. I don’t have anything nice to say about rigging so i wont go into detail about it 😀 *twitches*

here`s my character model. im going for the skinny elongated look. similar to my character from last year only much more refined. I spent a lot more time crafting this one and im more comfortable with 3D modeling now. only took me 5 retries on the character to get this good.

character modelling is as hard as ever but luckily for me I`ve since discovered how to implement drawings into the backgrounds. helps me get the shape right. and thankfully there’s no poly limit on this brief. but sometimes i think that would make things easier. less polys to manage. i`d say my model falls between middle territory when it comes to the poly count.

the style of the model is`nt a exact derivative from anything. but i was inspired by mysims and the humans from the raving rabbids series.

here’s some of my concept work on the character style.

the style translates pretty well to 3D so im happy with that 😀 as for the actual animation and story. ive only just recently got on top of that. other things have been keeping me distracted from it. but now i have the storyboard drawings done and a rough 2D animation made in the brilliant flipnote studio. here’s the paper version.

i`ll elaborate on what the hells going on.

this was the first draft. but there were a few details I wanted to change so I did just that in my fancy wancy moving storyboard

hope it made you laugh 😛 but im not happy enough with the final result so I will go back and refine it someday,but for the time being. it`s good enough for my upcoming pitch and crit. I changed a few ideas like removing the `joy` expression from the storyboard as it felt out-of-place in his mad rush. also the caller selling health insurance was a nice touch of irony. good thing about using the flipnote studio is that i can make a rough version of sound for the final animation. that and a still,paper storyboard cant help with timing the same way an actual animation can. thanks to my flipnote version I know for sure that my animation is long enough to meet the requirement 🙂 (50 freaking seconds! quite meaty)