this is part 1 of 2 for entertainment design semester 2, i`ll write the second part once this project is fully done and submitted.

for this project we are tasked of creating a small game with a group of around 8. to begin with we all looked at each others work from semester 1 and any new ideas we had.after a vote we established that we wanted to do a horror game, but it took us a while to figure out the perspective we wanted to use.to begin with we wanted resident evil style angles and a camera which follows the character but that was far  beyond our skills. initially i was keen to use 2D similar to darkseed. it`s a very underused presentation for horror games and i believe there are a lot of tricks and exploits that the genre hasnt discovered in this form yet. but eventually the group consensus broke down into the conventional first person point and click. (a recurring trend through the development of this games concept) similar to exmortis.

a big trend is horror games in the idea of not including combat or any enemies in the game (see silent hill shattered memories or penumbra overture) and i was really adamant that we use visual gimmicks,story and atmosphere to unravel the player rather than the presence of a monster, it`s such a unsubtle approach and i really regret that my team didnt agree with me.

the end boss of the game is a creature called the `spawn` which is around 7 feet tall and has white skin and a featureless face. in the groups view,they felt that a creature with human-like features is more scary then an outright monster. no matter how they described it i couldnt stop thinking of the regenerator from resident evil 4

the story and script stage was a part of the process i stayed out of it,after all im only a lowly artist i didn’t want to step on any creative shoes,i just wanted them to hurry that phase as quickly as possible so I could get to work. after weeks of stalling they finally decided upon a prison setting,build around a nazi camp,built on top of a templar castle containing an evil spawn. there is no exposition for the player being there whatsoever.they are dumped off a van and left to explore the prison to their own devices. possibly an effective method of intriguing the player but seems very rugged in terms of narrative. but thats just my opinion.

now that we had characters and settings it was time to start creating things, one of my fellow team mates created an intro screen where rolling your mouse over a corpse on the floor would cause blood to drain out of it which said “start” and clicking on it would cause it to raise its head and look at you. it was very cool and it was the first thing to come out of this project i actually liked so i took it upon myself to improve it as i hadn’t gotten the go ahead to start creating other things yet.i was so hyped and enthusiastic about this intro screen that i went ahead and redid it to suit the game a little more. instead of a normal body i replaced it with the `spawn` charector. and made the room look more prison-like.

yet in the end,the group choose not to use this one and decided to keep the earlier version in the game instead.

the only real *heads up display element (hud) is the item screen, and being as there is three distinct environments i made three of them for the game

back when i was a part of the room photoshopping process we had a way to streamline development time where we gave certain rooms higher priority for detail and graphics (low,medium and high) here is my rough example of the differences. 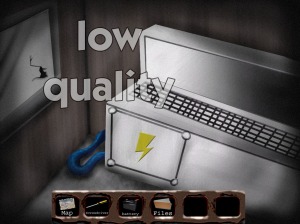 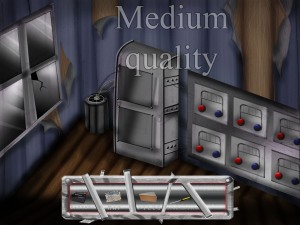 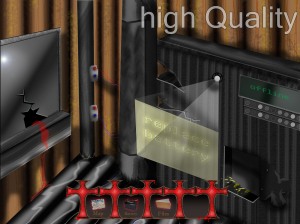 even though this was a good idea at the time,i don’t think it was ever taken into use,as all the rooms have the same discernible amount of attention to detail to them. which is to say quite a lot 🙂 the rooms photoshopped look good and that’s all the more fun for me to animate them.

another good staple of horror games is using journals to inject story and dialogue into the proceedings without all the hard work associated with creating a non-player character (npc) here are all the journals ive created at the time of writing. 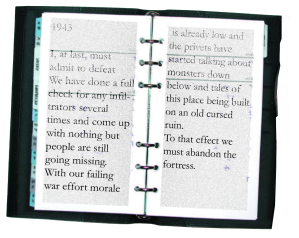 this is german filofax found in the nazi prison section of the game,it talks of the struggle between the spawn monsters and the soldiers which used to inhabit this place. 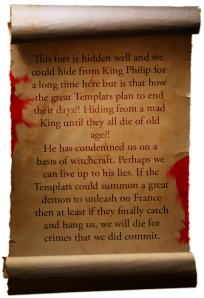 i really love the dialogue in this one,it hints at the origins of the monster and makes it seem a lot less shoehorned in for cheap scares.

this will be the last journal the player finds before having to deal with exterminating the monster.on the way to the templar section the player passes a gas chamber in the nazi camp section which is where the final puzzle is set.

as i mentioned earlier the start of the game is quite blunt and jarring but it was up to me to make it work, it`s one of few (or only depending on what other team members make) parts of the game where you can see your character, but i think we`re going for the true and tried method of immersing the player as much as possible by making the main character an personality-less avatar. in the vein of Zelda and half life.

the sound duties is for another member of our team so im waiting on dialogue for the guard and the sound of the van amongst other things. the hallway that the character gets thrown into is the very first room of the game,and we`re hoping to make the transition from cut scene to gameplay as seamless as possible.

ive created a list of lip synchs for the guard but the rest of the group has expressed their hatred of talking video game characters and how they never look quite right,but im going to try when i get the sound in regardless.

there’s only one other cut scene and it`s the gas chamber scene where upon completing the final puzzle,the monster is gassed to death. there is two parts to it. one where is the player doesn’t complete the puzzle in time the monster will walk up to the safety glass and kill the player

the other one will have the room be filled up with gas once the puzzle is done and the monster will collapse and die, but this will get made once the puzzle has been implemented. (the room will be filled up with smoke and the monster will slam against the glass and fall to the floor and die.you can see assets for it in the first cut scene,the tanks on the right will shake and the gas leak will all be animated as the player succeeds through sections of the puzzle to let them know they’re doing it right)

the one other thing i`ve done so far is animation for the rooms you traverse. at the time of writing only two rooms have been fully drawn and photoshopped and im anxiously waiting for more.

the room names are so damn catchy 😉

so this is all my work in progress so far,i doubt we will have enough time to create a full working game with every single room and puzzle we envisioned but im sure it will be a kick ass proof of concept.