i made this blog a little bit halfway through my 2nd year at  university so i`ll summarise semester 1.

i had two classes and one of them was digital media context. it was a lot of fun,definitely one of my favourite classes from my time studying so far. during the start of the year we had a lot of lectures going into the theory of creation and how the mind works in relation to digital arts. it was all very new age and confusing for me,luckily it was hugely irrelevant as all we had to do was create a piece of work inspired by an artist of choice and an essay about the creation and inspiration process.

my artist of choice was Andrew Jones (here is his facebook) he has a broad array of styles,but the main technique i wanted to copy from him was his recorded digital drawings with a  tablet, not only was this my first time using a tablet but my first time recording my works too so it was a lot of fun.

in my entertainment design class we had to come up with concepts for games based around certain titles (see next blog) and i was torn between to use my casino driving game or my Scottish rpg idea, luckily i was able to use both in some form, i made the driving game but i used my concept for drawings in this class, which is further made relevant since Andrew jones makes concept art for video games (most noticeably metroid prime)

please check out the embedded youtube videos,as they have commentary and a pretty banging soundtrack

william Wallace is designed as the main protagonist of the rpg. typically stoic and reserved and follows many rpg cliques (oversized sword,striking eye colour and hair) 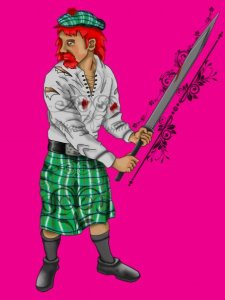 Edward the 1st designed as Williams goofy sidekick.due to a plot twist he is tricked by the evil english scientist and joins sides with william wallace to fix the damage that the time machine has done.

evil english scientist a crazed scientist who hates Scotland for winning most of te nations conflicts throughout history. he creates a time machine so help england beat the Scottish  but in doing so tears a hole through the fabric of space and time and it`s up to the heroes to save the universe. has illusions of grandeur and is inspired partly by doctor steel and dr robotnik

evil scot bots enemies designed by the evil english scientist. they use their stretchy arms to attack,in a similar fashion to bender from futurama.

red lions these beasts are creatures which roam the overworld in the game and attack the players on site. inspired by the scottish flag design, these characters are here to enforce the fantasy and mythological vibe of the concept.

i learned how the nitty gritty about recording drawings and how to use a tablet. 🙂

One thought on “Digital Media Context”